A urea consignment of 53,000 tons, imported by Trading Corporation of Pakistan (TCP), will arrive here on Friday (today). In June this year, TCP had finalised a urea import deal with M/s Trammo for the import of 50,000 tons at $337.17 per metric ton C&F to cater the domestic demand. As per schedule provided by the M/s Trammo, a ship namely “MV Eleni D” carrying about 53,000 tons of urea will reach Pakistan on Friday (today). 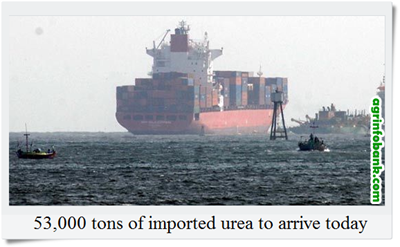 The shipment has already sailed from China and scheduled to berth at FAP terminal on July 26, 2013. Following the directives of the Economic Co-ordination Committee (ECC) of the cabinet, the TCP is engaged to import urea from international market aimed at meeting the domestic demand. Recently, TCP has also finalised another deal for the import of 75,000 tons of urea at $317 per ton, while another tender for the import of 225,000 tons is scheduled to be opened on July 30, 2013.

How to start an organic garden

The Benefits of Using Compost in Your Garden

Wanted: A New Villain In Agriculture?

Who Will Be the Next Monsanto-Like Villain in Agriculture?

Agribusiness July 3, 2013
Need Help? Chat with us
Start a Conversation
Hi! Click one of our member below to chat on Whatsapp
The team typically replies in a few minutes.
Support Team
agrinfobank
Online Store
Gardening Shop Karachi
I will be back in 7:30