The Met Office on Tuesday advised farmers to ensure field sanitation and prophylactic fungicidal sprays to safeguard the standing crops from diseases following the fresh rainy spell. “Weeds are expected to shoot in excess after the rains. Farmers should control weeds growth soon after the rains,” the office said in its 10-day advisory for farmers. 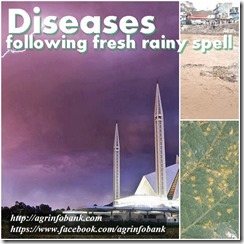 It said the farmers should halt irrigating their crops since the continuing rainy spell provided sufficient water and asked the growers to plan irrigation keeping in view the likely rain in agricultural plains of the country. “Wheat crop is growing at Heading/Flowering/Milk Maturity stages in most of the agricultural plains of the country,” it said, adding that farmers should step up to control further weeds growth to prevent negative impact on their crops. “Weeds removing practices should be started soon after expected rains in the mentioned areas,” the office said.
It says wheat crop is growing at very crucial development stages of milk maturity/ wax maturity, in Sindh and Punjab province. “Farmers of these areas are advised to irrigate the crops as per requirement keeping expected rains in mind,” it adds. Rainfall/ light snowfall over the hills and over upper and central parts of Punjab is expected in the next 10 days. It forecast rainfall for Sindh at isolated places during first five days of the advisory while dry weather is likely to prevail in its most parts till March 20.
It said rainfall/light snowfall over the hills and over upper and central parts of Khyber Pakhtunkhwa is expected during the period. Rainfall is expected at isolated places of Balochistan during the first five days of the forecast period. In Gilgit-Baltistan, it said mainly cold and cloudy weather is expected in most parts. However, light to moderate rainfall (with snow over the hills) expected at isolated places during the period. In Kashmir, the office said cold and cloudy weather with rainfall/light snowfall over hills is expected in most parts.

Feeding the community one garden at a time

5 Basil Varieties For Your Herb Garden

AgriNews July 19, 2019
Need Help? Chat with us
Start a Conversation
Hi! Click one of our member below to chat on Whatsapp
The team typically replies in a few minutes.
Support Team
agrinfobank
Online Store
Gardening Shop Karachi
I will be back in 7:7