Pakistan may lose one of its most profitable Kinnow markets, Russian market, and suffer heavily in case Russian government does not rescind its decision by December 1, banning import of fruits and vegetables from Pakistan. The ban was imposed by Russian government a few months back as the quality of fruits and vegetables did not meet the laid down sanitary and phyto-sanitary (SPS) conditions. 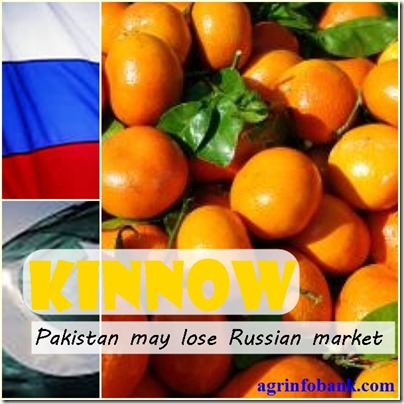 According to fruit and vegetable exporters, Pakistan’s department of plant protection should immediately lay down its quarantine policy in consultation with Russian authorities so that the quality of horticulture products could be improved.
The ban would impact on the export of around 50,000 ton Kinnow if the same is not lifted as the season has started and exporters are getting ready to ship the fruit to various markets.
They said that Russia is a good market for Pakistan’s fruits and vegetables, particularly Kinnow but in order to increase the volumes, they need to reduce the trust deficit and establish banking channels between the two countries.
Ministry of Commerce and Ministry of National Food and Security must take cognisance of this alarming situation and raise the issue at diplomatic level as the ban may cause colossal loss to country’s economy at this crucial juncture, they said.
A bumper Kinnow crop is expected during 2013-2014 and according to preliminary estimates the production might touch 2.1 to 2.3 million ton.
This year Kinnow will be shipped to Indonesia at zero percent duty as Indonesian government has allowed Pakistani Kinnow to be shipped to Tanjung port, Jakarta. The activation of PTA followed the signing of a Mutual Recognition Agreement (MRA) on plant quarantine and sanitary and phyto-sanitary measures between Pakistan and Indonesia wherein Indonesia officially acknowledged Pakistan as pest-free area for Kinnow.
Ministry of Commerce may initiate kinnow export agreement at zero percent duty with Thailand following the visit of Prime Minister of Pakistan.
Talking to Business Recorder, acting CEO of Harvest Trading, Azam Ishaque said currently Thai market is not open for Pakistani fruits but due to our geo-economic position Kinnow may easily serve the consumption volumes in ASEAN region.
Thailand is a trading nation and the exchange of business delegations could be a better option for exploring areas of common interest. Thailand has recently been recognised as the `world kitchen’ owing to the plenty of food resources as well as the continuous success in development in food industry. Pakistan could benefit from Thailand in processing of food to increase the shelf life of fruits and vegetables to curtail post harvest losses.
In this regard, Azam Ishaque suggested that both countries may set-up a joint committee on agriculture and share the concepts of modern technologies in agricultural systems for the improvement of agricultural productions such as crop yield, livestock production, aquaculture production and sustainable agriculture.

Breathtaking April Flowers That in Season

Agribusiness July 26, 2013
Need Help? Chat with us
Start a Conversation
Hi! Click one of our member below to chat on Whatsapp
The team typically replies in a few minutes.
Support Team
agrinfobank
Online Store
Gardening Shop Karachi
I will be back in 2:49