Punjab Minister for Housing Malik Tanvir Aslam Awan has directed the authorities concerned to take steps on emergent basis for provision of best meat, milk and poultry products to the citizen. He also issued special directives to local government department for setting up of a modern livestock market in Lahore extending all necessary facilities for livestock buyers and sellers. 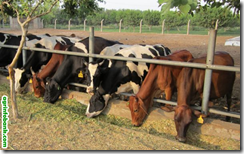 He was chairing a meeting to bring about positive changes for rearing exotic livestock breeds to provide high quality and high yield of meat and milk to the masses. The meeting proposed provision of Rs 87 million for completion of 11 farms on immediate basis and Rs 88 million for completion of ongoing projects left incomplete in 19 districts of the province. Another Rs 82 million was demanded for preservation of green fodder.
The Minister also directed to prepare a comprehensive plan for creating awareness amongst masses about promotion of rural poultry farming and checking the problems faced by the livestock industry and proposing its solutions. The Minister said it is the vision of the Chief Minister Punjab to provide healthy meat and milk to the masses in the province and departments should work for this cause on war footing.

How to Start an Aquaculture Business

How To Double Your Cucumber Production?

Gene Transfer Technology for Mushrooms: The Power and Potential for Significant...

Prices of flour, pulses, spices on the rise

Urea price expected go down by Rs. 400 per bag

AgriNews January 23, 2019
Need Help? Chat with us
Start a Conversation
Hi! Click one of our member below to chat on Whatsapp
The team typically replies in a few minutes.
Support Team
agrinfobank
Online Store
Gardening Shop Karachi