Pakistan could make tremendous progress in agriculture by sharing and engaging in public-private sector dialogue on the subject with Ukraine. This was stated by Engr M A Jabbar, Honorary Consul of Ukranie in Karachi on his return on Monday night after participating in the annual business conference held in Kyiv, Ukranie from June 13-15. 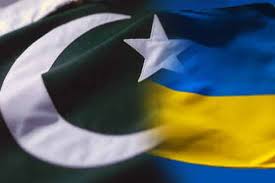 The official businessmen delegation led by Jabbar returned after enriching with the knowledge pertaining to the consideration of economic developments and allied features thereof in developing different segments of the economy in their own specific needs for affecting the overall growth and development supported by infrastructure and targeted subsidised measures.
Talking to Business Recorder, he said that the model could always provide inputs for considering structuring of developments of economic management in Pakistan. This benefit will help the delegates to prepare and fine tune their working as recommendations for the Ministry of Commerce and other ministries in considering the local trajectory of development which may be similar in most of the cases and may be amended for adoption due to increased sense and obligations of conducting the trade in the international trading rule on similar grounds providing very few exceptions including for Pakistan.
Ukraine, he said was preparing for free trade, customs union agreements which experiences together gave in sight of dismantling of barriers in the way of trade, harmonise the legislative work and adopt the legal courses of others so that the cohesion became the basis of generating level playing field for conducting trade and business in just & fair way to benefit bilateral, plulateral and multilateral trading amongst the signatory partners. Pakistan has similar situation to conduct the research on experiences of others for possible gainful adoptions in the interest of required economic developments.
Delegates of Pakistan, he said had the pleasure of the meeting the Prime Minister of Ukraine on the reception day and his imparting knowledge also provided a basis of better understanding of the Ukrainian approach for considering modifications in our own structural approaches for denting the flexibility to seek better way of considering recommendation of economic management required by the public sector of Pakistan.
Engr Jabbar said the conference was attended by the President of chambers of different countries as well as by Ukraine Chambers of Commerce and Industry. The presence of American Business Chamber of Commerce and Industry, former President of European Parliament, Prime Ministers of Montenegro, Lithuania and many other high profile positioned persons from abroad and from within graced the occasion as interventionists, discussants, panellist which together provided a knowledge to the delegates from Pakistan sufficient enough to consider the appropriate recommendations and move forward in preparing suggestions of political economy specific to Pakistan by just reformation of the domestic input requirements of total frame work consideration by such high profile business minds sharing their views in the annual conference.
He said that on the development needs of Ukraine for agriculture, the same could act as an advisory compulsion to engage public and private sector dialogues between both countries to improve our agriculture. Pakistan is agri economy, which generates the agri value added textile and needs to increase it’s per acre yield as well as needs to improve quality of agri produce to comply the importing requirements of the country on sanitary and phytosanitary barriers. Ukraine is doing so and we can share the same with the Ukrainian experiences as how they are making settlements of sanitary and phytosanitary barriers.
He said every 11th ton of grain in the world market came from Ukraine with the population of 45 million people. The Prime Minister made a statement that the government will support almost all branches of agriculture as a part of national economic development intensification programme for 2013-14. The exports of Ukraine in 2012 climbed by 40 percent with share of agriculture in GDP registering 11 percent.
Pakistan with the agriculture share of 23 percent of the GDP struggles for food security and yet to access to meet requirements of improvements in exports and value add the agri produce through allied industries which again remains to be achieved and strategize as a policy paradigm. The Ukraine trade in grain is 9.2 percent of the world grain trade. With agriculture exports reaching 22 billion US dollar a year affecting the increase in the budget revenues.
The most interesting panel discussion revolved around “Deep and Comprehensive Free Trade Zone between Ukraine and the EU: Prospects for business and investments” and “Development of the Customs Union and economic integration of CIS countries: Prospects for the Ukrainian business”.
Both these discussion had a diversified approaches which would give an advantage to understand the over and under advantages of conducting free trade with either of the block or concluding to prefer the one block over another block. Engr Jabbar said the state programme of Ukraine was to include taking measures to balance state finances with real capacity of the economy and to prevent economically unreasonable tax deductions. Pakistan may consider following this base line. It also includes introduction of mechanisms for remote liaison between taxpayer and competent authorities, which Pakistan as a policy has been making advocacy for real implementation.
It also includes approval of law under which business operations that fall under minor or average risk level may terminate under a relevant court decision only, which we also in Pakistan need to improve the business management and governance by protecting the apprehended risks. The Prime Minister of Ukraine has offered to businessmen that government is open for ongoing dialogue with business to commonly find additional measures required to improve business conditions. “We in Pakistan should also develop our integration with high offices of public sector so that continuation of dialogue as per changing environment becomes result oriented to positively affect trade and business in Pakistan.
We have learnt a lot out of panel discussions on “Presentation and discussion on the participation of business and investors in the implementation of the State activation program of the economic development of Ukraine for 2013-14.” He said that 73 measures with specific directions as smoothening and catalysts to increase the trade and business were worth considering for customised needs of Pakistan, he said.

Solubilization of unavailable potassium in soil via soil microbes

Fertilizer and Plant Nutritions May 27, 2021

A Future Out of Poverty with SRI

Basmati body calls for boosting rice exports to $5b

Rice May 13, 2019
Need Help? Chat with us
Start a Conversation
Hi! Click one of our member below to chat on Whatsapp
The team typically replies in a few minutes.
Support Team
agrinfobank
Online Store
Gardening Shop Karachi
I will be back in 1:22