A hormone is a chemical released by a cell, a gland, or an organ in one part of the body that affects cells in other parts of the organism. Only a small amount of hormone is required to alter cell metabolism.

Plant hormones, also known as phytohormones, are chemicals that regulate plant growth, which, in the UK, are termed ‘plant growth substances’.

Plant hormones are signal molecules produced within the plant, and occur in extremely low concentrations. Hormones regulate cellular processes in targeted cells locally and, when moved to other locations, in other locations of the plant.

Hormones also determine the formation of flowers, stems, leaves, the shedding of leaves, and the development and ripening of fruit. Plants, unlike animals, lack glands that produce and secrete hormones. Instead, each cell is capable of producing hormones. Plant hormones shape the plant, affecting seed growth, time of flowering, the sex of flowers, senescence of leaves, and fruits. They affect which tissues grow upward and which grow downward, leaf formation and stem growth, fruit development and ripening, plant longevity, and even plant death.

There are five generally recognized classes of plant hormone, some of the classes are represented by only one compound, others by several different compounds. They are all organic compounds, they may resemble molecules which turn up elsewhere in plant structure or function, but they are not directly involved as nutrients or metabolites.

There is only one naturally occurring Auxin: indole-3-acetic acid (IAA) and this is chemically related to the amino acid tryptophan. Auxins were the first plant hormones discovered. The term auxin is derived from the Greek word auxein which means to grow.

Abscisic acid, also called ABA, was discovered and researched under two different names before its chemical properties were fully known, it was called dormin and abscicin II. Once it was determined that the two compounds are the same, it was named abscisic acid. The name “abscisic acid” was given because it was found in high concentrations in newly abscissed or freshly fallen leaves.

This acid is known for its role in drought environments and inhibiting seed germination. We’ll talk about seed germination later on when we discuss giberellin, so let’s go with dry environments. When the plant senses it is dry it releases abscisic acid, which tells the Stoma to close.

Functions of Abscisic Acid:
The following are some of the physiological responses known to be associated with abscisic acid (Davies, 1995; Mauseth, 1991; Raven, 1992; Salisbury and Ross, 1992).

Cytokinins are compounds derived from a nitrogen-containing compound (adenine). Kinetin was the first cytokinin discovered and so named because of the compounds ability to promote cytokinesis (cell division). Though it is a natural compound, It is not made in plants, and is therefore usually considered a “synthetic” cytokinin (meaning that the hormone is synthesized somewhere other than in a plant). The most common form of naturally occurring cytokinin in plants today is called zeatin which was isolated from corn (Zea mays).

These are compounds that increase cell number, promoting cell division. Cytokines are released at the root tips and move up the plant. Cytokine and auxin together causes the plant to form a callus, the cells continue to divide without differentiating. This would be the equivalent as plant cancer, but unlike human cancer callus allow the plant to heal. We use plant calluses when propagating with tissue culture.

A list of some of the known physiological effects caused by cytokinins are listed below. The response will vary depending on the type of cytokinin and plant species (Davies, 1995; Mauseth, 1991; Raven, 1992; Salisbury and Ross, 1992).

Ethylene, unlike the rest of the plant hormone compounds is a gaseous hormone. Of all the known plant growth substance, ethylene has the simplest structure. It is produced in all higher plants and is usually associated with fruit ripening.

Ethylene is also a hormone released when the plant is stressed. While abscisic acid’s main job is a plant’s drought response, ethylene is a multi-purpose stress hormone. One example of its use is a growing seedling. If a seedling is growing and hits a rock it will release ethylene, which will cause its stem to grow shorter, thicker, and curvier. With this bending the seedling will grow around the rock. 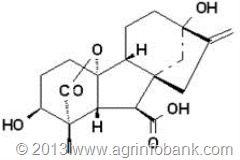 . Giberellin was discovered in Japan while researching “bakanae” this is Japanese for foolish seedings. The bakanae disease caused rice plants to grow extremely fast, so fast that the plant would not be able to support itself and fall over into the rice patty. Gibberellins are named after the fungus Gibberella fujikuroi, which produces excessive growth and poor yield in rice plants. Gibberellins, abundant in seeds, are also formed in young leaves and in roots; they move upward from the roots in the xylem (woody tissue) and thus do not show the movement characteristic of auxins.

Functions of Gibberellins:
Active gibberellins show many physiological effects, each depending on the type of gibberellin present as well as the species of plant. Some of the physiological processes stimulated by gibberellins are outlined below (Davies, 1995; Mauseth, 1991; Raven, 1992; Salisbury and Ross, 1992).

BIO: I am doing my B.S. (IInd Year) in Agriculture & Agribusiness Management at the University of Karachi.

What is organic farming?

Prices of flour, pulses, spices on the rise

What is organic farming?

Pesticides October 30, 2017
Need Help? Chat with us
Start a Conversation
Hi! Click one of our member below to chat on Whatsapp
The team typically replies in a few minutes.
Support Team
agrinfobank
Online Store
Gardening Shop Karachi
I will be back in 6:48