The historic Silk Road system of trade routes across Asia would have been the origin of much of the early human initiated dispersal of many, now cosmopolitan, oriental pest species to Europe and the converse, together with the dispersal of pests from and to places en route. The pests most amenable to this type of movement were those associated with durable commodities and staple diet consumables. However, a degree of susceptibility to dispersal is evident, with some grain and structural fabric pests proving highly mobile and now cosmopolitan while others are still relatively restricted to their original areas.
These latter, such as the very destructive dermestid khapra beetle, Trogoderma granarium, and the bostrychid larger grain borer, Prostephanus truncatus, have achieved major status as quarantine pests in recent times because of their still limited distribution. Nevertheless most pests of durable commodities had achieved cosmopolitan status before the advent of modern phytosanitary practice and these pests have become even more widely dispersed through recent sea and air trade. 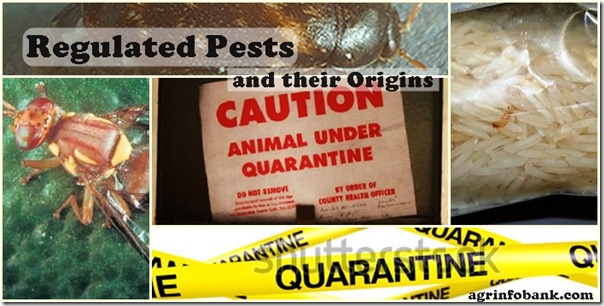 As trading ships became faster the type of host commodity transported became more diverse and with it the pests associated with more perishable commodities as these were included in trade or carried as sustenance of ships’ crews. Dispersal of the Mediterranean fruit fly, Ceratitis capitata, illustrates this well (Maddison and Bartlett, 1989). A major host is citrus and early voyagers learned the benefits of fresh citrus to prevent scurvy. Citrus was cultivated in the Asian subcontinent from earliest times (Willis, 1966) but with the advent of trade became widely cultivated in the Mediterranean region especially the Iberian and Italian peninsulas where Mediterranean fruit fly was probably endemic by then, despite its southern African region origins. With the development of sea trade, convenient ports were developed for watering, fuelling and replenishment of food including fresh fruit and vegetables. Today many of these can be identified as areas of establishment of Mediterranean fruit fly including the Canary Islands, St Helena, Cape Province South Africa, south-west Western Australia, Hawaii, Central America and landfalls in South America such as Rio de Janeiro. Undoubtedly there were other areas where the species failed to establish initially or failed to survive long term including eastern Australia and New Zealand.

A source of confirmation of pest dispersal in this way can often be found in the label data on specimens in entomological reference collections in the locations in question and elsewhere the species might have been of interest. Many are recorded in distribution data of taxonomic papers on the pest species. Care must be exercised to differentiate between specimens taken as interceptions at entry and those from established populations at the recorded location. However, even interception records are valuable in that they indicate the possibility of establishment on that or other occasions. The outcome of this historical process is that many pests will be found to have reached their limit of dispersal before phytosanitary quarantine became an established practice. In some places they will be recognizably endemic and consequently of no justifiable quarantine significance. In other places where establishment potential is marginal they may be present and persisting below the limit of ordinary detection. If this can be determined, there might be no justification for quarantine barriers to trade with respect to that pest. The reliability of pest incidence data is in direct relation to the search effort put into detection surveys.

Maddison, P.A. and Bartlett, B.J. (1989) A contribution towards the zoogeography of the Tephritidae. In: Robinson, A.S. and Hooper, G. (eds) Fruit Flies, their Biology, Natural Enemies and Control. Vol. 3A. Elsevier, Amsterdam, pp. 27–35.

The life cycle of thrips

Use of spurious pesticides on cotton crop rampant

Research and development of vegetable crops in Pakistan Their main issues...

Acceptances of Biological control of rice stem borer and its effect...

Use of bio-fertilizers in agriculture

Growing Rice (Paddy) in a Container

THE STATE OF GLOBAL FARMING

How to Get Rid of Aphids Naturally

Aphids July 31, 2018
Need Help? Chat with us
Start a Conversation
Hi! Click one of our member below to chat on Whatsapp
The team typically replies in a few minutes.
Support Team
agrinfobank
Online Store
Gardening Shop Karachi
I will be back in 6:51